The trailer of upcoming ZEE5 original film Atkan Chatkan is out, and it looks like an inspirational story with a lot of heart. In the trailer, we get introduced to Guddu who wants to be a musician, but doesn’t really have the resources to learn music.

Guddu works on his skills and creates music on whatever he can find and forms a band that could potentially win a competition and get them all into a music school. Apart from his economic background, Guddy also has to fight his father in order to realise his dreams.

While AR Rahman is presenting Shiv Hare directorial Atkan Chatkan, the music of the film is composed by legendary percussionist Sivamani.

Talking about the film, Sivamani said in a statement, “As kids, we have always been a little lost and looking for hope for our bizarre dreams that only make sense to us at that age, just like Guddu. It is an amalgamation of these four kids’ burning desire to fulfill their dream. A musical that will take you on a rhythmic journey of hope and dreams. We all need a bit of hope at this time.” 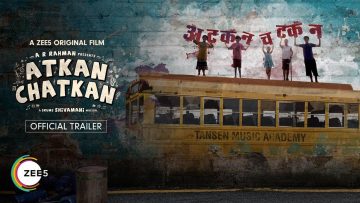