The film is perhaps best remembered for its songs, composed and arranged by the late S. D. Burman, written by Majrooh Sultanpuri, and sung by playback singers Mohammed Rafi, Lata Mangeshkar, and Kishore Kumar. Film did above average business at box office as per the Bollywood trade magazine published at that time. Jaya Bachchan won the Filmfare Best Actress Award for Abhimaan. According to Aalif Surti film is based on troublesome marriage between two sitar maestros Ravi Sankar and Annapurna Devi.Also according to author Raju Bharatan, Hrishikesh Mukherjee based the film’s story on the life of singer Kishore Kumar and his first wife, Ruma Ghosh although it has resemblances with the 1954 movie A Star Is Born.It was remade in Tamil in 1983 as Nenjamellam Neeye starring Mohan, Radha and Poornima Jayaram. 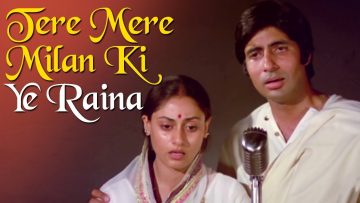